Spending many years in theater, I think I developed a more lax view of modesty than some.

I mean, given certain natural variations, we all have the same basic equipment, right?

I used to go to a gay (disco) bar (yes – disco, that’s how old this fat old lady is) after performing in a Gay 90s revue (the irony of which is not lost on me) back in the day.

And since it was the disco era and fat girl cool disco clothes pretty much did not exist in mid-Michigan (if anywhere), I sewed.

In particular, in 1976, I made myself a strapless jumpsuit – blue with stars, and a kimono jacket with white and red stripes.

Subtlety was never my strong suit.

I was standing at the drink station (I used to drink sloe screws – getting two at a time, so I wouldn’t have to wait when the first one was gone), having been handed my two drinks (and thus my hands were full), and a  patron, behind me, pulled my top down.

I was not upset enough (or at all) to waste two perfectly good drinks by dropping them to protect my (somewhat lacking) modesty.

The bartender was, to say the least, nonplussed, but I just handed him back my drinks, pulled my top back up, retrieved my drinks and back to our table.

And, yes, this is the infamous jumpsuit a few years later walking down some street of LA with our friend Dead Myrna (another story for another day).  As you can see, it wouldn’t take much to tug.  As the old joke goes, the only thing holding that up is a city ordinance! 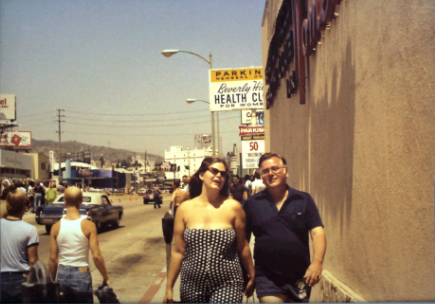