We have this orange tabby named Murphy.

When we got Murphy he was long and lean.  Now he is the epitome of a Kliban cat.

He is a hell of a nice animal, frequently mistaken for a meatloaf.

He has a sweet voice which he uses – a lot; mostly demanding pets at a place and time of his choosing.

Bill calls Murphy, “The Sweet One.”

Murphy loves to push things off the edge of tables.

Found treasures (often pushed from the edge of tables) that make extremely noisy toys are chased throughout the house – preferably in the wee hours of the night.

He likes belly rubs, but reserves his right to grab you with his claws without warning.  But you know in a fun – hardly draws any blood – kind of way.

Murphy tolerates my pets, and he does love going into the bathroom with me.

But mostly, Murphy loves his Daddy. 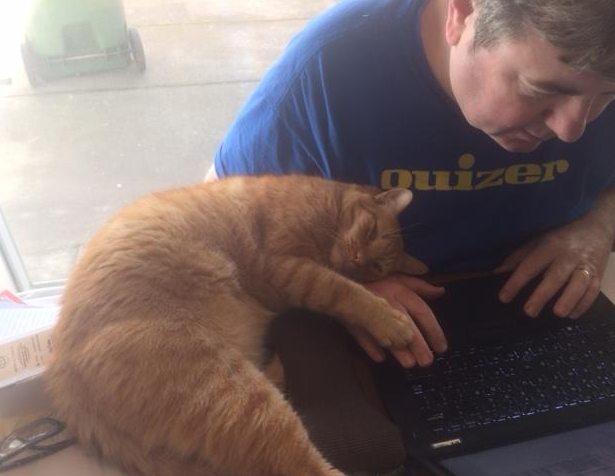