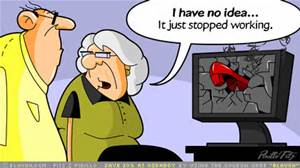 Why, oh why, oh why do Firefox and NetFlix hate each other?

Does everyone have this problem? Or is it just lucky me and my computer? For most of my internet stuff I use Mozilla Firefox. I find it is the least problematic – except and until I try to use Netflix. Then I am guaranteed that Firefox will totally lock up at least two times (and often more) before it will allow Netflix to load and run.

Netflix is much easier to open on Google Chrome; but then I find there are more issues with trying to actually watch something – too many hiccups, drags and lags. At least with Firefox, once you can coax it to load Netflix, watching stuff is pretty much problem free.

I really don’t care whether I use Firefox or Chrome. I just want to watch some stuff on Netflix!

So let’s figure it out and play nice! And let me get back to my stories! I have a long list of mindless entertainment just waiting to be streamed into my fat old lady head!