So for all you folks who think that teasing a fat kid is just part of “tough love” so they won’t get fat(ter), guess what.

And you just accomplished exactly what you are claiming you don’t want to accomplish.

And you know what, the same goes for fat-shaming, fat bullying, and health concern trolling.

It doesn’t work and it doesn’t even help.

Not even a little bit.

Because you know what?

There have always been fat people.

There will always be fat people.

A lot of it is genetics.

Some of it isn’t.

And you know what?

It doesn’t matter why a person is fat.

It’s none of your fucking business.

All you are doing is fucking with the size that person would be if you let them just be the person they were meant to be.

They come in all shapes, sizes and colors.

But they are all tomatoes.

Nobody has a fit when the tomatoes on a vine aren’t all the same size.

Why can’t we be as accepting of people as we are of fucking tomatoes?

And in case, you haven’t gotten the message, here is a photo from a NAAFA Convention fashion show with this tomato strutting herself in a fucking bikini!!!  And if you don’t like it, I’m a tomato – eat me. 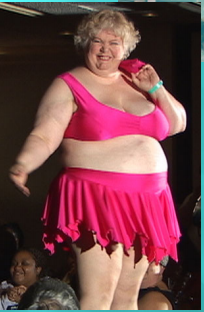