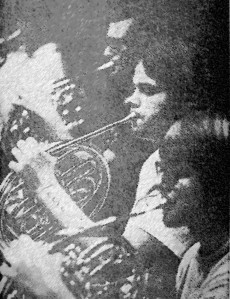 I have noticed in my singing that my breath support is just not as good as it used to be.

So I decided to do something about it.

I pulled out my old French Horn (I’ve had it since High School – at the advice our HS band director, Mr. Story, my mom and step-father took me down to Detroit to try out horns. I chose a Walter Kroner horn – looking it up now on Google, it looks like the sales people gave us a bogus story about the horn (we were told that Walter Kroner worked for Alexander horns, but left to start his own company). Turns out Walter Kroner was a brand name for Hoyer horns sold through Custom Music in Detroit. Hoyer horns (made in East Germany) are excellent instruments, and I have to say I tried a bunch of horns (including an Alexander) and I loved (and still love) my Kroner.

It has been over 10 years since I’ve toodled on my horn, and I am pleased to say that I don’t half stink. Accuracy in notes and control are really rusty, but they are coming back amazingly (to me) fast.

So I’m enjoying my horn and building up my diaphragm muscles at the same time.

The cats, however, are not thrilled.