I was working on some clips from shows I’ve done (you are subscribed to my YouTube channel, right – Terri Weitze? RIGHT?), and I was reminded of an onstage adventure.

In the original musical, A Winter’s Tale (A Dickens’ of a Christmas Carol), there is a number where the Ghost of Christmas Past sings and dances with two other ghosts (yes, I know, it’s the Dream Ghosts) in a song called Who’s Gonna Care.

It’s a great number – and it was really kind of visually stunning because I and my friend Lyda were the two back-up ghosts (since one woman plays all of the ghosts in the show) and we both had on floor length purple satin robes and we both had very long very red hair.

Anyhow, the dancing in this number included lots and lots and LOTS of twirling around and swooping.

Y’all know, I’m not the most graceful dancer on my best day – but you do a number enough times (we did this show every year at Christmas time for three years running) and I can learn anything.

Well, a desk in another scene has a little dowel rod inserted, so you could hang up your hat or coat or whatever the fuck they used it for.

But one performance the desk HAD a little dowel rod.

It came off – onto the stage, and there it sat – waiting for us to come onstage in our full length robes.

At first I thought it was a pencil – I only later learned who our nemesis was.

This fucking thing got UNDER my robe – and being floor length, after that there was no escape for it – or me.

I tried to kick it out – but the little fucker would just keep coming back for more fun with Terri’s feet.

You try to twirl and whirl and swoop around a stage with a fucking dowel rod trapped under your feet!

I assure you, it’s not a good time.

I survived without my ass actually hitting the stage – barely.

So the lesson is – if you see something on the stage that doesn’t belong, and you have the chance – pick the fucking thing up.

If you can’t pick it up – try to kick it offstage.

Because I promise you, at some point, that fucking thing is going to bring havoc to someone’s life.

And I’d just as soon it wasn’t mine. 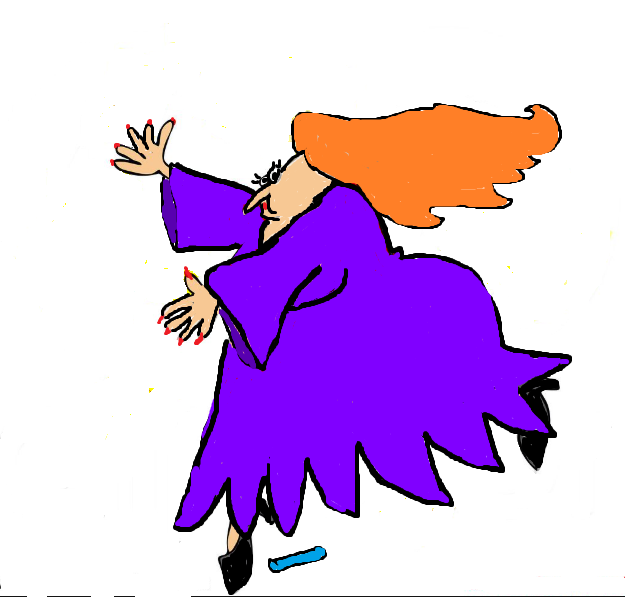