For some reason, I’ve been thinking of my first apartment lately.

It was awful, but I was so proud to have a place of my own.

In an old house that had been divided into 4 apartments – mine was a 1 bedroom on the first floor, right off a freeway and in a somewhat sketchy neighborhood.

The flooring throughout was linoleum.  Old, crappy linoleum – but it meant I didn’t need a vacuum – a broom would suffice.

There were mice in the walls.

I thought they were contained to the walls until I went to use a loaf of bread and found that the loaf was now a hollow tube – the mice had eaten everything but the crust!

It was within walking distance to my job – a long walk, but doable in nice weather.

And best of all, it was cheap!  Dirt cheap.

My furnishings were minimal to say the least.

I had a comfy chair and ottoman in the living room and a TV,  some folding TV tables (for fine dining on things like mac & cheese, and PBJ sandwiches and soup), a dresser, and a double bed.

And how does a young hip single woman on her own keep herself entertained?  I did jigsaw puzzles on the floor.  I have no recollection how I kept the cat from carrying off pieces.  And since I had nothing to decorate my walls, I was one of those people who got glue to put on the completed puzzle to preserve it as “artwork”.  (Yes, I was once that young and stupid – though, to my credit, I do not believe I ever actually put up one of my masterpieces on a wall.)

I wasn’t there very long, moving to a duplex to share with someone (who then bailed on me – after I had gotten laid off).

After that, I ended up moving back in with my Grandma (thank you Grandma for always being there to save my stupid young ass) for a couple of years before moving to California.

But I was able to move to California knowing that I could live on my own and deal with life in general, thanks to that little shit hole of an apartment. 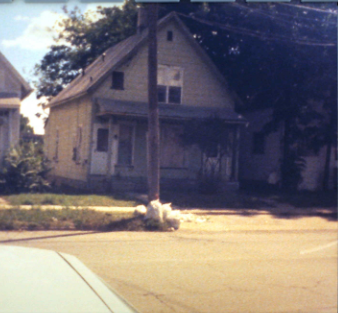 Looking at the building, my apartment was first floor on the right.