We all have those moments where we have a choice to make, and looking back, you realize how impactful it was on where your life ended up.

One of mine was a job I got through the Michigan unemployment office.

I had been laid off (because I took off a summer to do the Fischer Troupe, and thus lost my seniority) from my job at Liberty Loan.

I was young, and freaked out.

The unemployment office sent me out to St. Charles Lumber to apply for a job as an interim bookkeeper (their’s was having some surgery), and, much to my relief, I got the job.

It was a hike to get to St. Charles, but it was just supposed to be for a few months.

They loved me there.

I don’t know what their previous bookkeeper was like, but they loved how quick and accurate my work was.

They loved that I could operate a 10-key calculator by touch.

They loved that I could type up a letter quickly with no spelling errors.

First, the car I was driving blew the fuck up.

I was driving to Frankenmuth for rehearsal, and the engine just went kapow and a bunch of black smoke came out from under the hood.

I had only had the car for a few weeks.

My stepfather, who had procured the car in the first place, found me another – but now I was a little concerned about the reliability of these used cars.  Especially when I was living in Essexville, working in St. Charles, and rehearsing/performing in Frankenmuth.

You do the math.

The second thing was, Ron and John, the director of the Fischer Troupe and his lover, had opened a candle shop in Frankenmuth and they offered me a job as head sales clerk, and manager/bookkeeper.

Clearly, doing shows and working in Frankenmuth would make the stress regarding my car a lot less worrisome; and I liked Ron and John.

So I gave my notice at St Charles Lumber.

I explained the problem about having to do all that driving and my beater car.

They offered to co-sign a loan for a new (as in not-used) car, if I would stay with them.

I was not prepared for that.

I still quit and went to work for Ron and John, and ended up moving to Los Angeles.

And the rest is history.

But to this day, I wonder what my life would have been like if I had stayed with St Charles Lumber. 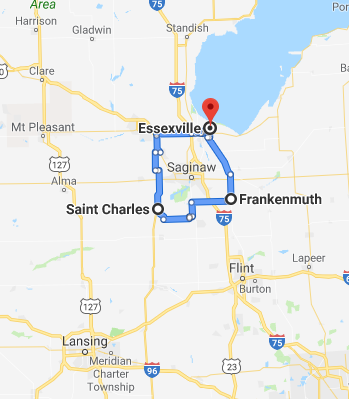