I had to buy a new office chair.

A bolt in the arm of my old one broke clean off!

It broke clean off with part of the bolt still firmly screwed into the seat of the chair.

And worst of all, it was the arm that has my mouse pad attached to it.

The morning it arrived, my husband helped the UPS lady get the large and heavy box into the house, because I was either still sleeping or in the shower – I forget which.

Either way, imagine my surprise when I enter the living room and find a box that had clearly been through the wars on its way to my house.

A box that clearly had not been handled as fragile and was not “this end up”.

The whole bottom (which was now the top) was totally busted open.

I can’t believe UPS had the balls to deliver this box – apparently without comment.

After years of working in a law office, I took photos before I touched the box.

If so much as a screw was missing, you know I was going to be chewing me some UPS ass.

But they lucked out.

Amazingly enough, all of the parts were there, and with my husbands help (a LOT of help – have you ever put together an office chair – yikes!!!  All I can say, is thank the good lord (that I don’t believe in) I married a mechanical engineer!) my chair is now put together and in use.

I had bought a new strap-on mouse pad (not as exciting as it sounds), and it works even better on this chair than the old one!

When I flipped the (now empty) box over, I found that the “top” while still in one piece, had a big gap across the top where the two top edges of the box that should’ve met in the middle, and it was held together with a big strip of packing tape – one strip, because heaven forbid you should waste a second or third cross strip in an effort to keep the many and heavy chair parts inside the fucking box.

This product was never properly packaged to begin with, but UPS accepted it for delivery – and somebody had to notice that this packaging was not going to hold up. 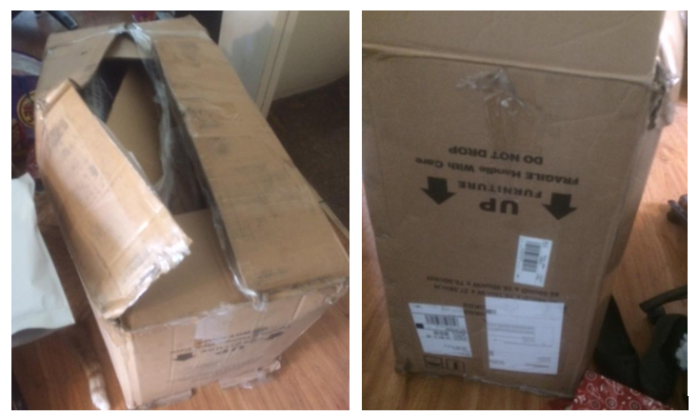