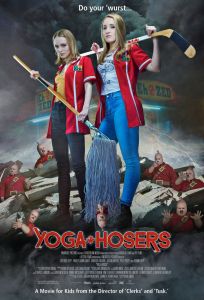 Tonight my husband and I went to see a screening of Kevin Smith’s latest film, Yoga Hosers.

We are both long time Kevin Smith fans.  We listen regularly to podcasts Fat Man on Batman and Hollywood Babble-on, as well as Kevin Smith adjacent Tell ‘em Steve Dave.  We used to listen to Smodcast, but we’re not as diligent about it these days.

Kevin is in the midst of his “True North” trilogy – Tusk, Yoga Hosers, and Moose Jaws.

Have to admit, I am not a huge fan of Tusk.  Loved the idea, but the execution lacked Kevin’s usual whimsy.

However, Yoga Hosers reeks of whimsy, and I loved it.  Every silly campy bit of it.

This movie is everything you expect from a Kevin Smith movie, as well as a big dollop of the bizarreness that has marked his recent films.  And it is funny.  Truly funny.

Jonny Depp reprises his role as Guy LaPointe; and the movie stars Kevin’s daughter Harley and Depp’s daughter Lila Rose; and of course, they are joined by some of Kevin’s usual gang of suspects.  It feels like a bit of a homecoming or family reunion, and is just as warming and crazy as a big gathering of family can be.

Kevin says that the target market for Yoga Hosers is tween girls.  Well, he needs to expand that demographic to include fat old ladies.