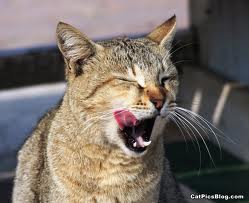 Everybody thinks giving a dog a mouthful of peanut butter is hilarious. And they’re right. Happy dog, happy people. Win-win.

Cats are generally to dignified to stoop to such antics (plus they like peanut butter but are not crazed for it like a dog is).

Yesterday, however, I discovered that our tabby Leo really likes Peeps.

But cats are famous for liking really strange stuff (but that’s another blog for another day).

I had bought a bag of strawberry mini-Peeps; and Leo kept digging the tear-off strip from the top of the bag out of the trash to chew on. When I took it away from him he would tell me vigorously and loudly that he WANTS THAT!!! Give it, give it, give it!

So I decided to see if it was the leftover Peeps flavor he wanted or if he wanted the plastic strip to chew/floss.

Thus, I offered him a strawberry flavored mini Peep.

I held one end of the Peep while Leo vigorously licked the crunchy sugary coating and then tried to bite into the Peep.

Apparently, cats are not mentally equipped to deal with squishy stretchy food, no matter how nom the food is.

He would bite and then back up while the Peep stretched out but refused to give in to sharp kitty teeth. And when he let go, the Peep would snap back into its former position – a bit wetter to be sure, but not much worse for wear.

So we had a good ol’ time with the little mini Peep. Leo lick, lick, licking, then pull, pull, pulling. Leo’s end of the Peep was pretty soppy with kitty drool. He was able to pull a few bites off and he thoroughly enjoyed those as well.

I know Peeps are not on the recommended food list for cats; but everybody needs a little food fun. And since I’m not going to stock live mice, this seems like a doable alternative for a once in a great while treat.

So Leo had a fun treat and I got to be vastly amused. Cat owner’s version of win-win.