I have done two musicals through a college.

Let me tell you something – if you have a chance to do a show through a college – do it.

It is a different world.

They have a full costume department, staffed by people who are excited about doing costumes.

Often – new costumes, made just for the show.

Orchestras that are made up of people who are studying music and only want to play music for a living.

In other words, the people on the stage are often the least focused of the people working on the show.

The actors don’t always consider this a career-path.  At least a number of them, are probably doing theater because they (misguided fools) think theater is fun.

Let me be clear, theater is (or at least can be) fun – but, imho, if you are doing it right, it is also a shit-ton of work.

I was in a production of Chicago done by Cerritos College in association with the Southern California Music Conservatory (at least I think that was the group), down in the LA area.

They recreated the Broadway set (and I know they got it right, because I saw Chicago on Broadway in 1976).

The prop person provided vintage props.  (I became his BFF when I found the cap to a 1920s flask that a cast member had dropped.)

I had a more than full length white fur stole for my entrance (I played Matron Mama Morton).

They even filled out the orchestra with union musicians (something they could do since we were in the LA environs).

Something, you may or may not know – Equity members can perform in college shows – because Equity believes that the professionals are participating in “educating” the students.

The other college show I did was Bye Bye Birdie at West Valley College.

I played Mae Peterson (aka Mama) and, I rocked it – hard.  Last I know, the photo below is displayed in the theater’s lobby, and it is one of my all time favorite photos of me in a show.

They made me a full length (fake) fur coat – which I covet to this day.

I tried to buy it off of them, but they refused to sell – even when I promised I would loan it back to them if they needed it.

So far, as far as I know, I am the only one who has used the coat – having borrowed it for a production of 1940s Radio Hour and for another production of Bye Bye Birdie!

If you do a college show, you will have to register for the show as a class, and yes it will cost you a little money, but the experience is well worth whatever you spend. 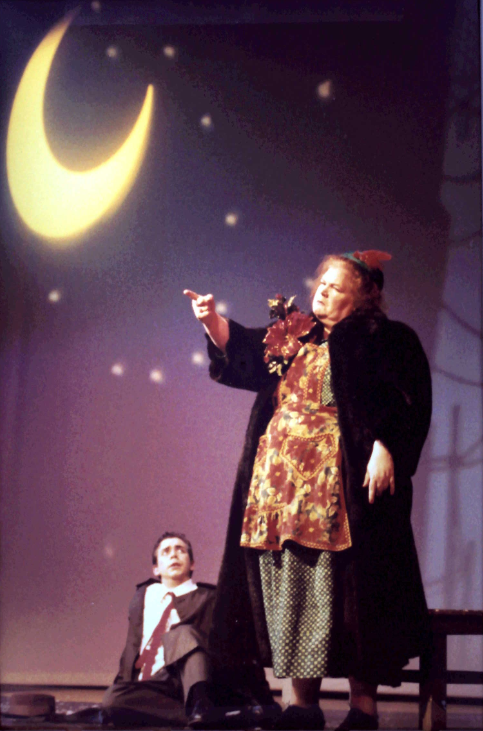