Leo has been so lonely since Ollie passed.  He about broke my heart when we were playing with “THE TOY” and Leo kept stopping to look down the hall to see when Ollie would come play too.

So I started scouring the internet to try and find a little brother for Leo.

I found most places wanted you to take kittens in pairs.  I understand when kittens bond with each other, they want to keep them together, but I was worried a bonded pair would leave Leo as odd man out.

I found three orange tabby kittens at the animal shelter, but before I could go look, they were gone.  Turns out the cat rescue place where we got Leo took them in.  So I contacted them about meeting the kittens.  They were supposed to be at a cat adoption fair this weekend, on Saturday and Sunday.

So today, we went to the Town Cats’ adoption fair, and turned out the three orange tabby kittens were already adopted.  However, there was this young orange tabby who I kind of liked – named Murray.  I asked if I could see him, and I got to hold him.

It was love at first snuggle.

He’s a year and a half old, and as sweet as he can be.

We brought him home, and kept him separate from Leo for a bit, but Murphy (which I think is a much better moniker for him, and I aver that Murphy agrees with me) was so calm, we let Leo into the bedroom.  They sniffed each other, and Leo started following Murphy around, and that was it.  No hissing no batting at each other.

Murphy hid for a while in my closet, but he is now out and about, exploring and stopping to demand snuggles and pets.

So we are once again a 2-cat household. 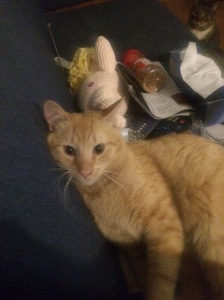 And if that isn’t cute enough – here are Murphy (above) and Leo (below) – can you believe these cats have only known each other for a few hours?