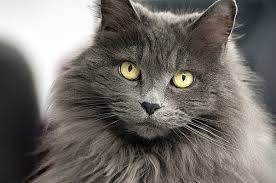 I thought I would give you all an update on how our gray fluff cat Oliver is doing.

He is doing much better.  Not perfect, but better.

He gets prednisone twice a day.  I’m not thrilled about it because I know, long term, prednisone can destroy his thigh muscles.  At least that’s what happened to our old blind cat Salem.

But it’s a trade off.

He stopped taking Pill Pockets pretty quickly.  I guess he’s smarter than we ever gave him credit for.  So now, I crush his pill and mix it with butter.

He also gets a B vitamin shot every other week (after going through a series of 6 weekly shots).

He no longer freaks about his shot.  He doesn’t like them, but he now seems to understand that they are not life threatening events – just a poke with the sharp thing and afterwards, he feels a lot better.  Well enough that sometimes he even wants to play with our crazed tabby, Leo, a little bit.

He eats a select protein diet of venison and green peas.  And he likes it.

He has also started filling in the corners with regular dry food.

The vomiting is down to maybe once a week – and usually caused by a big old hairball.  Not surprising, when you are a fluffy gray kitty.  And the diarrhea is almost completely gone – once in awhile, we have a little relapse, but nothing major.

He still is asking for cuddles, which is so nice.

He is no longer starving all the time.  (He was eating 3 cans of his special food a day, and now he goes through one a day.)

And I’m pretty sure he has put on some weight – not so alarmingly bony, and when I pick him up for cuddles, he is turning into a bit of a load.

We never did get a diagnosis.  The likely culprits are either cancer or feline irritable bowel disease.  He’d have to have surgery for a firm diagnosis, and we’re not going to put him through that.  His fuzzy little brains would explode from the terror.