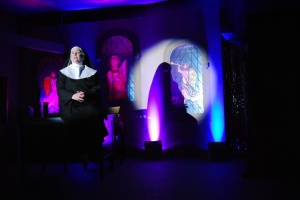 For the longest time, I stopped going to see local theater.

I didn’t stop because South Bay Community Theater isn’t good – on the contrary. We have an amazing amount of uber-talented folks doing theater in this area, and the choices of shows to see are good too.

Since doing 1776, I am trying to make more of an effort to go see stuff. Especially stuff with friends in it.

Also, I’ve always been a fan of nuns. I have played Mom Abbess in Sound of Mucus, I have played Sr. Amnesia in Nunsense Jamboree, and in LA I was part of a singing group called The Hot Cross Nuns.

Ruthie rocked the show. Especially, the warm heart-felt songs which I have always felt are her forte. Nobody can touch your heart like Ruthie.

As if doing a one-woman show is not difficult enough, she also got to deal with an especially rowdy audience. Two tables of the 1776-Chicks and their friends and partners; and another big table of local theater folk, with a few other theater couples interspersed around the room. You know theater folk are going to be trouble makers in any kind of show that encourages audience participation.

You know theater folks are looking for trouble when three of them show up in nun garb! Leandra, Kayvon and Steve came as a trio of nuns, and it only made sense that Ruthie got them onstage when she needed a trio for back-up singers in one song. Leandra and Kayvon are MONSTER dancers and choreographers and Steve is a comedy genius. Needless to say, hilarity ensued.

So I not only got my fat old ass out to see a fun show, starring a very talented lady and friend, but I got to spend the evening in the company of some wonderful theater folks I do not spend nearly enough time with.

So if you got good community theater in your area, go out and support it.

If you don’t have good community theater in your area, get involved and make it better.

An Actor is a sculptor who carves in snow. – Lawrence Barrett

2 thoughts on “THIS FAT OLD LADY GETS A LESSON”