Okay.  I am currently in a wonderful show called A New Brain.

The composer is William Finn.

A New Brain is no exception.

In fact, imho, Mr. Finn has gone out of his way to make this music difficult.

In particular, the music for the Mother (which I play).

Specifically, a little nightmare of a ditty called Throw It Out.

One of those wonderful songs with hellish syncopation, tongue twisting lyrics (book by Warren Harding, who’s he, show him out, I’ll just keep discarding, you’ll see, throw it out, and you come through – say that as fast as humanly possible – now SING it, twice as fast, while running around gathering books and – you guessed it – throwing them out!), and an orchestration that has almost nothing to do with what the singer is doing.

I have listened to multitudes of women (thank you YouTube) trying to sing this song – and NONE of them get it exactly right.

Our musical/vocal director/conductor has given up on me ever getting it exactly right.

We have compromised on – he’ll be happy as long as I can end with him.

That I can do.

Thanks to hours and hours of working with the music which I entered, note by fucking note, into my wonderful (and highly recommended) music program MuseScore.

And you can add to the fun, the fact that our orchestra (and hence the conductor) are behind us.  Us singers can’t get a downbeat to save our souls.

And then, prior to this past weekend, the theater had put in a new sound system.

Needless to say, at the first performance for the weekend, there were issues.

A major issue was our inability to hear the piano part in the orchestra.

Needless to say, I got thoroughly lost in Throw it Out.

But, my motto is, when in doubt, sing the fucking song.

And I did.  From time to time, I’d hear the whisper of something familiar from the orchestra, and I’d adjust to try to bring us back together.

But for the most part, I was truly winging it.

We all got through it, and we (mostly) ended together.

In my mind, it was a glorious trainwreck.

Then after the show, a young German man approached me and asked if I played Mother.

He then proceeded to tell me how he found my syncopations and rhythms in Throw It Out absolutely fascinating.

When in doubt, just sing the fucking song, Louise. 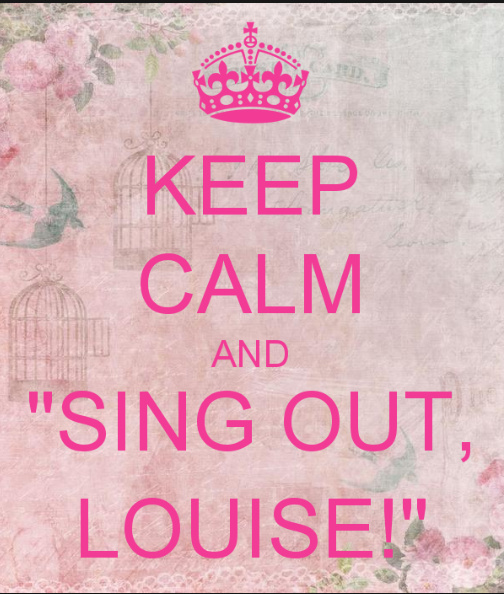